Magento 2 Demo on Docker and Panamax 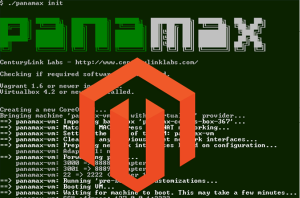 I had a question – is Docker useful to demonstrate Magento 2 progress? Magento 2 updates are pushed weekly to GitHub so the code is available, but is it useful making it easier for people to run the code? In practice what may be of more interest showing the installation steps used, knowing that they work. Please add a comment if you try it and find it useful.

Disclaimer: I work for eBay with the Magento team, but this post is my personal opinions.

I have written a bit about Docker before, but one aspect I have not mentioned much before is the Docker image repository. This is a central public repository where images can shared for easier reuse between projects. (You can also have private repositories for use inside your own company.)

For example, I have created a Magento 2 build based on 0.1.0-alpha89 (currently the release level is hard coded into the script). The Dockerfile and instructions to build the image are on GitHub. The built image is available on the Docker repository. If you look under the ‘tags’ tab you will see ‘latest’ and ‘0.1.0-alpha89’ are both available. Once you have Docker installed, you can download this image using:

This release is a few weeks old, but is the same version I used in a previous post on Magento 2 progress with Composer.

I describe how to use this image below, but as much use may be to have a look through the Dockerfile and supporting shell scripts to see how it is put together. For example, Magento 2 is deployed using Composer and then I restore a database dump with a few products loaded up. (In the future a proper data loading script will be provided.) Right now, the reason to explore Magento 2 is more around the changes to the code base rather than the functionality.

Wiring it Together with Panamax

Panamax is currently running a competition to get people to create Docker templates using their tools. Nothing like a deadline to see how easy it is to deliver a project using new technology, so I decided to give it a go (and enter the competition as well). For me, so far it is a story of both good and bad experiences. (Note: the project describes itself as 0.2.0 – not production ready yet. So bad experiences are to be expected.)

Good news: Defining a template using Panamax was trivial once I had my Docker images.

Bad news: My personal experience so far is it is still a bit unreliable. The UI is done pretty well, but the web server stopped responding for me a number of times. I suspect it was because the default install on my Windows set up a Virtual Box VM with only 1GB and within that I was loading up Panamax, MySQL, and Magento 2. I cranked the memory up to 8GB and it seemed to work better, but I still had problems (e.g. sometimes a search would not respond).  (Note: as I write this there was a 6.1 earthquake overnight – so not sure if internet cable were affected. The whole house was shaking and I am an hour and a half away from the epicenter. I don’t envy those in the middle of it!)

One thing that got me confused for a bit was I needed to add my own Panamax repo under the ‘sources’ section – an issue I raised on GitHub got that cleared up quickly. (Positive note: I will say GitHub issues I have submitted have been responded to promptly, even on weekends.) This was a matter of going to the ‘Sources’ section (the middle column between ‘Applications’ and ‘Images’) and adding ‘alankent/panamax’. My saved template (magento_2_demo.pmx) was then available for search and installation.

When I searched for ‘magento’ I also noticed a Magento 1.X Panamax competition entrant by paimpozhil. That might be worth checking out as well. Mine is “Magento 2 Demo” (currently waiting for my pull request to be accepted).

Creating Your Own Template

One good experience is that it was pretty quick to use the UI to create my own template. The following is a quick run through if you want to try and create one yourself to see what Panamax is like. Note: The following is not a replacement for reading the Panamax documentation.

If it does not work immediately, you can try to the reload button which will destroy all the images and create them again. Note that the Magento image takes a while to start (a minute or two) because each time the container starts it wipes and recreates the database. (Obviously this is not a production image!)

Wiring it Together using only Docker

So how would this have been done without Panamax?

Panamax does additional things like restart servers automatically on failure, but at the end of the day Panamax is a UI the hooks onto Docker.

Is it useful for Exploring Magento 2?

So is this useful? It can be used to get Magento 2 up and running quickly without worrying about so many configuration settings. I loaded up a couple of jacket products to get something happening out of the box. (The image is not that polished yet – it is just a quick demo to get feedback to see if worthwhile proceeding with.)

You can get inside the container to have a poke around at the code and configuration files using nsenter. I would do this in combination with looking at the Dockerfile and shell scripts on GitHub.

To me this has been an interesting experiment, I have learnt a lot more about Docker and Panamax, but it is not yet clear to me if this is value for learning more about Magento 2 specifically. What do you think? (Hint – try the comment button below!)

← Installing Panamax on CoreOS (Quick Note)
Docker, Distributed Systems, and Why it Matters to Magento (Part 1) →